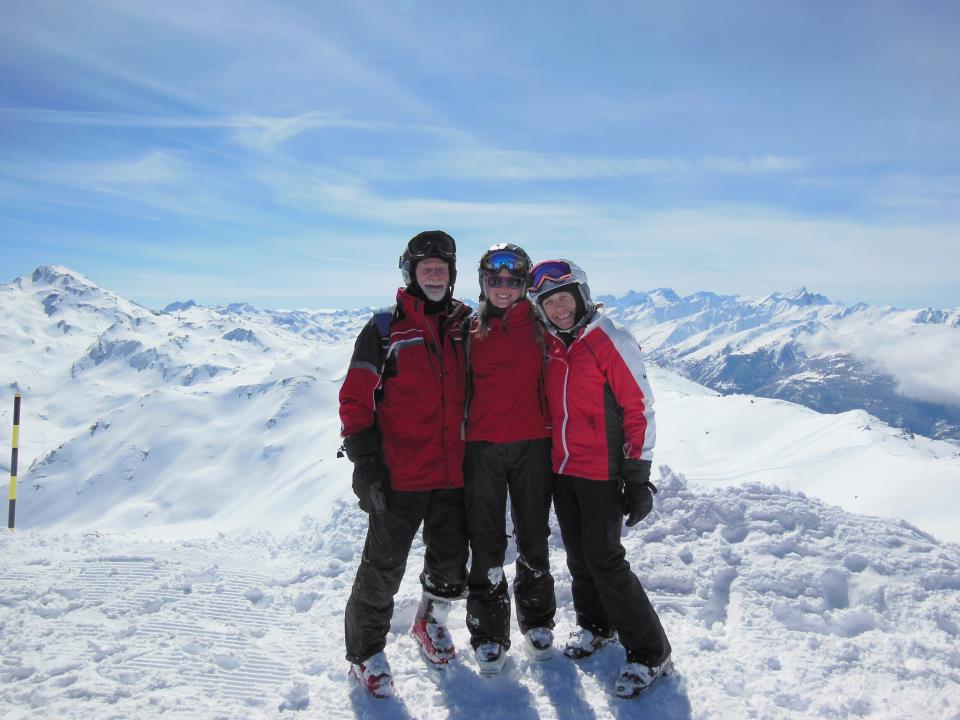 At the top of world – Frank, Carolyn and our granddaughter Hannah…in search of more great recipes!

We are back from another wonderful vacation, this time to the Trois Valle area of France.  We had absolutely fabulous skiing and even better eating. One of our favorite lunches on the mountain was Tartiflette.

It is ubiquitous on menus in the chalet restaurants that dot the ski slopes of the Haute Savoie in France. However, the origins of the recipe are a little blurred.

The French Haute Savoie region borders Switzerland. Over the centuries the border was often disputed and so today is the exact location of the dish’s origin: the Swiss claim they first created it, the French claim it’s theirs.
Whoever it belongs to—it’s amazing!

Even the cheese has its own unique and clandestine history, which sets it apart from its more mainstream gooey French counterparts, Brie and Camembert…

During medieval times, Alpine dairy farmers had to pay taxes to the owners of the pastures. The amount they paid depended on their daily production of milk. To avoid paying in full, they would milk their cows most of the way and pay their dues. Then under cover of darkness, they would milk their cows a second time, drawing a richer creamier milk perfect for cheese-making. In fact, the word reblocher means ‘to milk a second time’.

And now you don’t have to go to France to enjoy it. We may serve it as breakfast side dish or for even for dinner with a crisp grenn salad with a mustardy dressing

Ingredients
1. 2 1/2 lb potatoes, peeled
2. 1/2 lb slab bacon, cut in small dice
3. 1 medium onion, thinly sliced
4. 3/4 cup dry white wine
5. Salt
6. Pepper
7. 1 lb Reblochon-style cheese, sliced
Preheat the oven to 350 F. Place the potatoes in the pot, cover with water, and bring to a boil. Cook for about 20 minutes, or until the potatoes are easily pierced with the knife. Remove from the heat, drain, and let sit until they are cool enough to handle. Cut the potatoes into thin slices and set aside.
In the sauté pan, cook the bacon over high heat until browned. Drain, leaving 1 tablespoon of fat in the skillet and add the onion. Cook over moderately high heat for about 5 minutes until golden brown then add the bacon and wine and cook for another 5 minutes, stirring occasionally. Add the potatoes and season with salt and pepper.
Remove the potato mixture from the heat and place half of it in the ovenproof dish. Spread half the cheese slices atop the potato mixture. Cover this with the other half of the potato mixture. Top with the remainder of the cheese. Bake in the hot oven for 20 minutes, or until golden brown and bubbling. Serve hot.
The cheese is the key to the flavor. It’s worth the effort to find it. 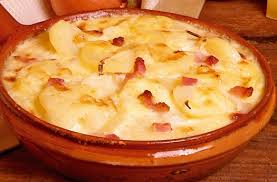