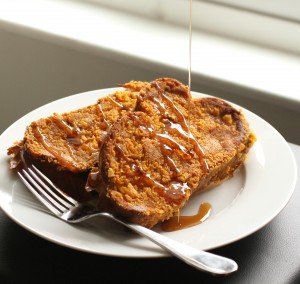 Do not be put off by the name. This is seriously wonderful French toast. I served so many second helpings this morning, I was afraid I would run out of bread.

2 tablespoons butter or margarine – of course, I used butter

Crush cereal in a resealable food storage bag using a rolling pin or mallet to make fine but not powdery crumbs.

Whisk together milk, eggs, sugar, vanilla and cinnamon in a shallow bowl. Use fork to dip both sides of bread into egg mixture; remove quickly allowing excess to drip off. Don’t allow bread to become soggy.

Dip bread in cereal mixture, coating both sides and pressing lightly to adhere. Set aside and repeat with remaining bread slices. Melt one tablespoon butter on non stick griddle over medium-low heat.   Cook 4 prepared slices of French toast 3-4 minutes per side until crisp and golden brown.

I served with both maple syrup and also a mixed berry sauce.

Tips: Watch carefully to prevent over browning. The original recipe says that you can keep cooked slices warm in a 275 oven while cooking the  second batch